After many years of civil war and conflict, South Sudan is making steps towards building peace and stability following the signing of the Revitalized Agreement on the Resolution of the Conflict in the Republic of South Sudan (R-ARCSS) in 2018. 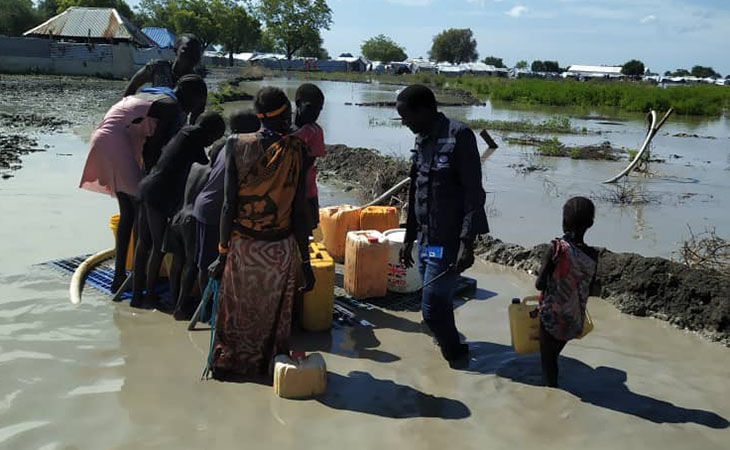 However, the effects of protracted crisis continue be felt as an estimated 1.6 million people remain internally displaced and nearly 6.5 million are severely food insecure. Access to improved sanitation facilities is less than 10% (6% rural and 28% urban) while access to safe drinking water from improved water sources is estimated at 50% (48% rural and 60% urban).

During the prolonged crisis, cholera outbreaks were confirmed yearly from 2014 to 2017. During this period at least 28,676 cases including 644 deaths were reported.

In response to the cholera outbreaks of 2014-2017, hotspot mapping was undertaken. Subsequently, integrated WASH and oral cholera vaccine campaigns were implemented in cholera hotspot and most at risk counties in 2017 and 2018. There have been no confirmed cholera cases in South Sudan since 2018.

In June 2020, the National Cholera platform that brings together stakeholders from relevant government sectors and health/ WASH partners reviewed and updated the National Cholera Preparedness and Control plan.  Preparedness and readiness capacities were reinforced given the projected above average rainfall. The implementation of the preparedness plan entailed mapping health and WASH partners with capacities to respond in the cholera hotspot counties along with the availability of cholera investigation, case management, IEC materials, laboratory test kits, oral cholera vaccines (OCV) and WASH kits. This mapping informed the prepositioning plan to replenish stocks and enhance capacities for cholera prevention, timely case investigations and prompt response.

This year the rainy season was severe and caused extensive flooding in the Eastern parts of the country affecting over one million people in 43 counties. As part of the flood response, cholera risk assessments continue to be conducted and is integrated into the overall health needs assessments. Two high risk counties, Bor South and Pibor have been identified for preventive OCV campaigns targeting respectively 74,846 and 93,250 individuals one year and above. Preventive OCV campaigns are conducted to complement the WASH, health promotion, surveillance and other related cholera prevention measures.

The South Sudan National Cholera Platform is also developing a five-year National Cholera Control Plan that embodies multisectoral interventions for sustainable control of cholera by addressing the underlying drivers of the cholera risk in the hotspot areas.